Steve Redhead has collected together a series of compelling and illuminating interviews he has conducted with some of the most influential and popular young writers who have emerged in the Nineties. 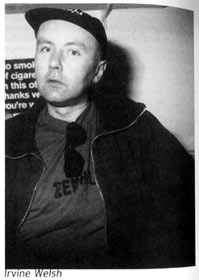 The common denominator here is that all the writers are inspired as much by music and popular culture as by literature. The interviews reveal the deep influence that music — particularly rave and dance culture, but also the earlier ethos of punk rock — has had on many of these writers.

Redhead probes beneath the surface of this end-of-the-century cultural cross-fertilisation and gives a unique insight into the writers that he has dubbed “the repetitive beat generation”.

a provocative, and funny look at an important turning point in modern literature. Just when you thought DIY was DOA. Don’t miss.

With intriguing insights…Redhead’s collection is a think tank of opinion on the importance of culture and music in modern, alternative writing.

fantastic…interviews that both entertain and stimulate.

It all fits perfectly.

The authors who most significantly influenced the literature of the 1990s took their inspiration as much from pop music and pop culture as from any literary tradition…their views on the cultures which spawned their work cannot fail to interest.

It’s an energising collection with a real sense of its time, of being at the heart of a scene grounded in the real world.

Redhead’s gentle interviewing technique proves to be a winner: he manages to unearth information more aggressive hacks could not. It is engrossing to read Warner and Welsh’s confessions…and it is amusing to discover that Roddy Doyle is supporting a Belgian opera based on The Commitments.

A series of compelling and right on interviews…Your parents won’t like it.

a much needed survey…Inevitably, a survey as ambitious as this is bound to find itself spilling over the edges in these 14 accounts which give the Repetitive Beat Generation its fascination and, indirectly, its best qualification to stand as an accurate group portrait. You feel that the individual writers, even when united by friendship or by the experience of reading tours, are only glancingly interested in any notion of a collective sensibility. With regard to writers in general, that is pretty much business as usual.

Michael Bracewell for The Independent