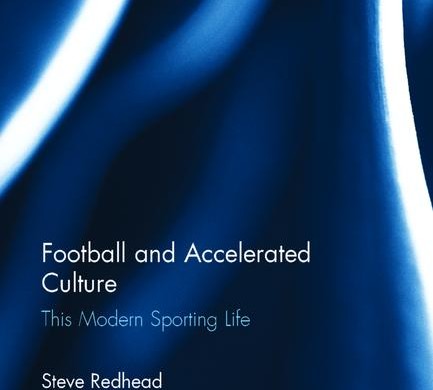 My new book Football and Accelerated Culture: This Modern Sporting Life is now out. It is my sixteenth book. Part of it involves my long term research based on ethnographic work on global football culture. What gave me an insight into football culture that enabled the ethnographic part of the work to be done over many years? Here’s some background to that ethnography, and general research work, reported on in many of my books in the fields of popular culture, sport and cultural theory. I grew up watching and playing football in the North West of England. After flirting briefly with the idea of being a train driver (or a cowboy), I decided I only wanted to be a professional footballer. My father was a lifelong Blackburn Rovers fan and took me to games as a child and young teenager all over the North West – at Blackpool, Preston, Liverpool, Everton, United, City, Stockport, Burnley, Blackburn, Oldham, Bolton. It only seemed a matter of time, in my deluded pilgrimage to all these grounds, before I ran out there too. And this wasn’t just local, it was international football culture. In the 1966 World Cup in England he took me to two of the greatest games in the history of the competition at Goodison Park. On a gloomy Friday night Brazil (without Pele who had been brutally kicked out of the competition by Portugal) against Hungary (with glorious striker Florian Albert and flying winger Bene), which ended 3-1 to Hungary, and on a sunny Saturday afternoon North Korea against Portugal, where after the Communist nation had gone 3-0 up in the first twenty minutes, Portugal (well, Eusebio, actually, who got four on his own) ran out 5-3 winners. Football culture, passport to the world? The beginings of ‘anti-modern’ football?

My paternal grandfather had been a ‘money in the boots’ amateur goalkeeper in (non-League) Lancaster and Morecambe (they literally put money in his boots in the changing rooms at half time) and had once been offered a trial by Bolton Wanderers. Surely being a professional footballer was in the blood; a career in the game a cinch. I was offered a trial by Skelmersdale United, newtown boys who were at the time gaining a reputation as a rising amateur team who produced players like Mickey Burns who went on to play for Blackpool. ‘Skem’ seemed a long way from my home in Blackpool, especially if it meant training at night after school, so I passed, thinking something better would come up. But as my peers at school got snapped up by clubs like Wolverhampton Wanderers and Coventry City, people like the excellent all round sportsman Mick Maguire who became a midfielder at Norwich City and eventually deputy Chief Executive at the Professional Footballers Association, I realised this burning ambition had passed me by and eventually I became an academic specialising in sport and popular culture and its legal and social regulation. Paid for something you love doing! Not a bad substitute, but not like the real thing either.

My first academic job allowed me to turn out on a Wednesday afternoon for the venerable Aytoun Wanderers. This was the staff football team of the institution and consisted of two teams. The first team, which I started off playing for, had conventional masculine amateur sporting values of the time – play hard, with a modicum of skill, kick the opponents more than they kicked you, end up winning whatever it took (or at least not losing) and have a beer and a curry afterwards. It comprised staff who worked at the institution but also included ‘ringers’ – usually students of the institution who were on the books of professional teams, could run rings round twenty and thirty somethings like us and were built like brick shit houses. One of Martin O’Neill’s brothers was one of our ringers at the time. He was a law student – Martin himself had been a law student at Queen’s University Belfast before becoming one of Brian Clough’s team of supermen at Nottingham Forest. The second team though was a different kettle of fish. I started playing for them after a serious leg break (tib and fib broken at right angles) sustained in a slightly higher standard Saturday League game for someone else, and following sixteen weeks in plaster for rehabilitation. The second team were serious in their ‘anti-modern football’ enterprise. They were mostly hard core leftists who expressed the view, off and on the field, that competition, winning, caring about league position, and number of goals scored in the season were ‘bourgeois concepts’. Style (soccer style) was OK though; the second team played in copycat Juventus shirts, black and white stripes, with white shorts, easily eclipsing the horrible red and green shirts of the first team, and some of the stuff we played was, momentarily, glorious. Even if the second team players were individually good enough to go up to the first team, they would rather stay in the second team because it was an important part of a more general commitment to an everyday socialist and communist life that they had – various left political organisation memberships, Marx’s ‘Capital’ reading groups, trade union activity, selling the left’s papers, labour movement debates, sustained critique of football and sporting culture in the wider capitalist world. The politics of football culture in everyday life was a serious business back then. It mattered. One Wednesday afternoon though, the most notorious opponents of both teams – the Bin Men – stole our ball!! Every team had to provide things like their own priceless, precious ball for the weekly games, so this infamous incident went down into club and institution folklore until it seemed apocryphal amongst all the conversations about ‘jumpers for goalposts’ football being better than the stifling, machine-like, cynical fare served up every week by the various professional clubs we all followed. As the Bin Men story was told and re-told for years at the beer and curry after-match sessions, memories faded and became more hazy with the passage of time. Reader, I assure you, it happened. Hey, Mister, Can We Have Our Ball Back? Please!